Food don’t taste bad on the other side: Wujie, a mind-blowing vegetarian restaurant in Shanghai

Wujie is a modern restaurant in Shanghai, specialising in all vegetarian food. People who know me would know that I am a big meat lover, hence my apprehension towards vegetarian cuisine. Long story short, I was sincerely awed during my visit to Wujie.

Wujie was started by a Taiwanese businessman, Song Y. B, originally in the real estate business. After experiencing a series of health issues himself and in his family, he decided to go all out vegan. I suppose he too, encountered the same problems I had with vegetarian food at the time, and decided to launch his own empire of vegetarian food to cater for the market. Originally only with a small restaurant of another name, he had since opened a series of modern and upscale restaurants under the WUJIE branding, with he himself deeply involved in the R&D of the vegetarian delicacies.

Truth be told, most of my encounters with vegetarian cuisine, especially in China had been lacklustre attempts at faking meat dishes with soy and flour based substitutes. The make-believe dishes often end up resembling a little like the original meat counterparts, but taste bland and one-dimensional.

Enter Da Shu Wu Jie / 大蔬无界 AKA Wujie. Opened 4 years ago at their flagship restaurant on Tianping Lu, they now have 2 more restaurants, one on the Bund and one in Lujiazui.

Many thanks to Cheryl for the invitation at the original Tianping Lu outlet.

The original outlet is housed in its own independant building, overlooking Xujiahui Park.

There are 4 storeys, with the top storeys reserved for private events. Most of the diners are usually seated on the 2nd storey.

The design and feel is very taiwanese LOHAS; Clean and simplistic with a subtle Japanese zen-like feel.

I especially liked that on every table setting, there are two pairs of chop sticks — One for personal use, and one for communal use. This is the first time in my dining across asia (where communal chopsticks are a thing) that I’ve seen individual communal chopsticks for every seat, very thoughtful and creative. 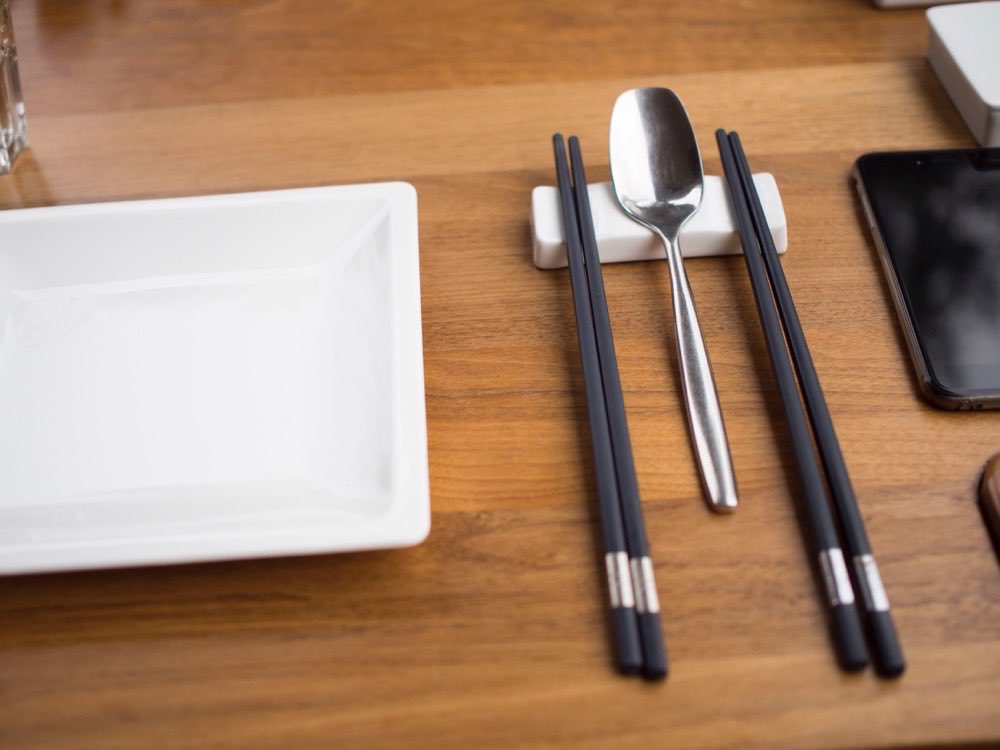 Menu and orders were taken in the form of an iPad app, something i felt a bit out of place despite the restaurant’s ‘organic’ touch. 8.5/10

As this was an invited tasting, service will be an unbiased 7.5/10

That said, I did observed that service was very attentive and courteous. When we arrived and left, the waitresses would smile sincerely and greeted and bid us farewell. The service staff have definitely been well-trained.

On to the good part.

This was actually modelled after the Japanese Tonkotsu (Pork Cutlet). Wrapped beneath the breaded panko crumbs was a cutlet made of tofu skin, mushrooms and some other secret mince.

Paired with it were dipping sauces and a little mortar bowl with sesame seeds which you grind yourself. 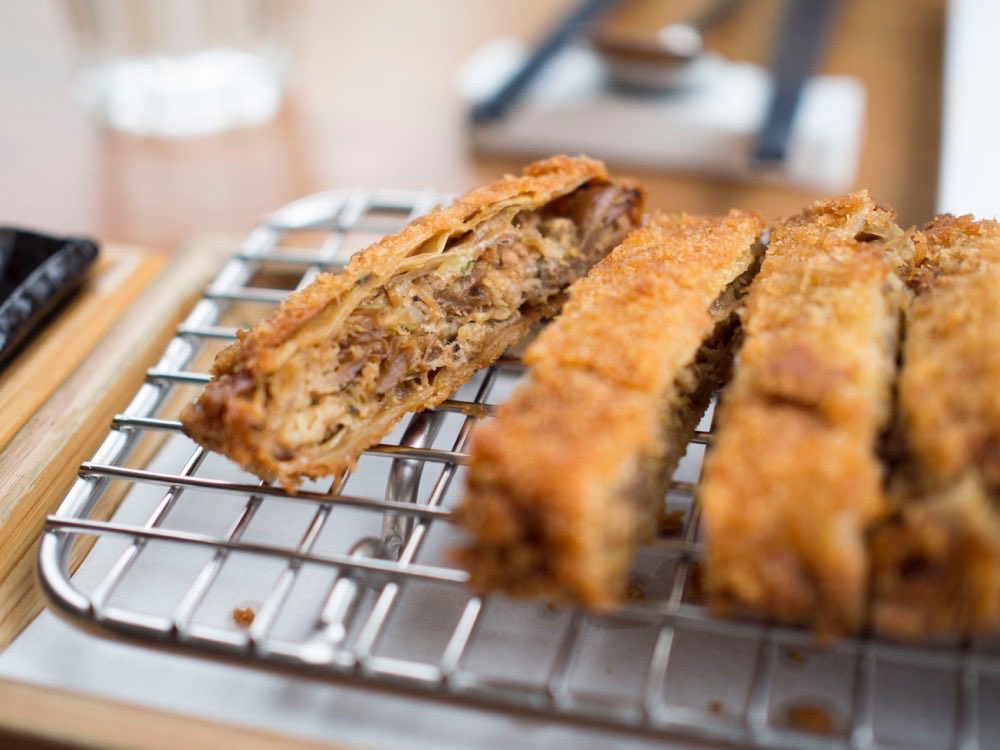 This was a happy start to the meal, because I was totally blown away not only by the light and crispy crust, but also by the umami-laden filling. The cutlet was perfectly seasoned and had a lovely meaty texture that didn’t fall apart, but was still tender and bursting with flavour.

Holy macaroni! I would eat this over a tonkotsu any day, if only it wasn’t so expensive. 8.5/10 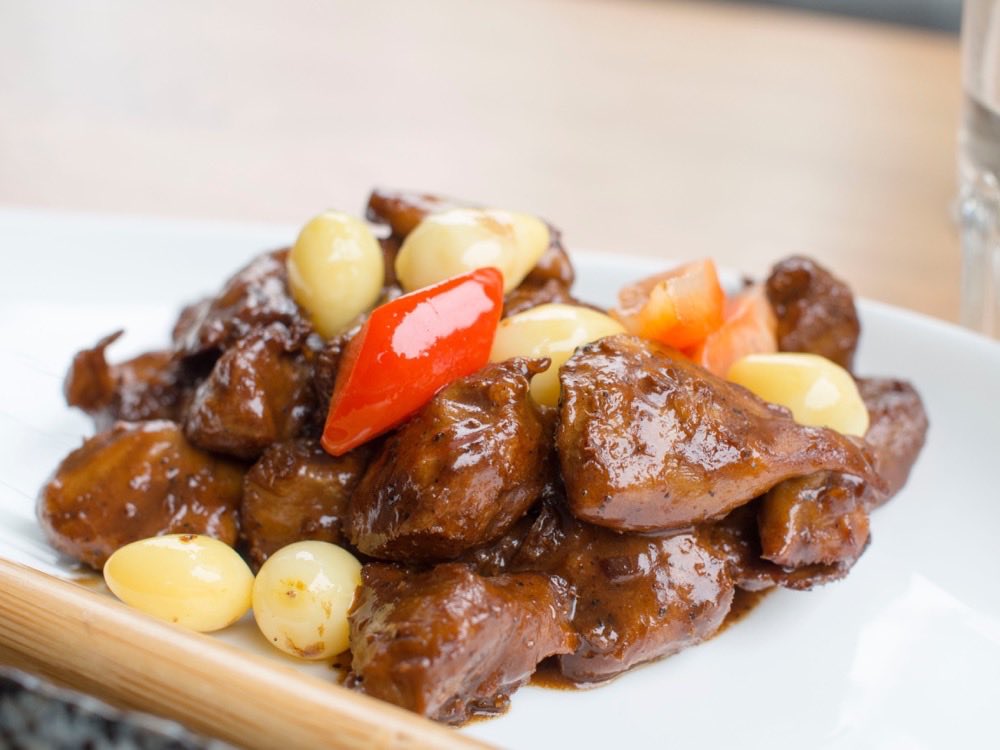 Modelled after the typical cantonese black pepper stir fried beef fillets. The meat was made using mushrooms. Minds and tastebuds were blown away again, by the complexity of the black pepper sauce, which brought me instantly back to the black pepper crab sauce in Singapore. The actual fake beef? Flavour-wise, it had absorbed the pepper sauce nicely, and contained an unexplainable savoury taste because of the natural umami acids found in mushrooms.

Texture-wise, it had a little bit of bite but was not tough. Consider it pleasantly chewy to resemble the texture of meat. Expecting a vegetarian version of a medium rare piece of beef is probably asking for too much. Long story short, I enjoyed this vegetarian of black pepper beef immensely, and was thoroughly impressed that they managed to pull this off. 9/10

I ordered this mainly for novelty, because I’ve read about it before and this uncommon ingredient is usually used in top-class omakase Japanese restaurants. The scientific name for it is “Lentillifera Seaweed”. As you can guess, it is a type of seaweed, and is pre-dominantly farmed in the Philippines, although it is enjoyed also in Okinawa, Japan.

The version at Wujie was beautifully presented, dangling on a fork over a dressing of wasbi-soy vinaigrette.

On it’s own, the sea grapes had a subtle ocean flavour, less strong as konbu. I felt that when dipped in the vinaigrette, the taste was pretty much overwhelmed by the wasabi soy, making this more of a texture and presentation kind of dish. To confirm your suspicions, yes, the sea grapes do burst in the mouth when bitten into. 7.5/10 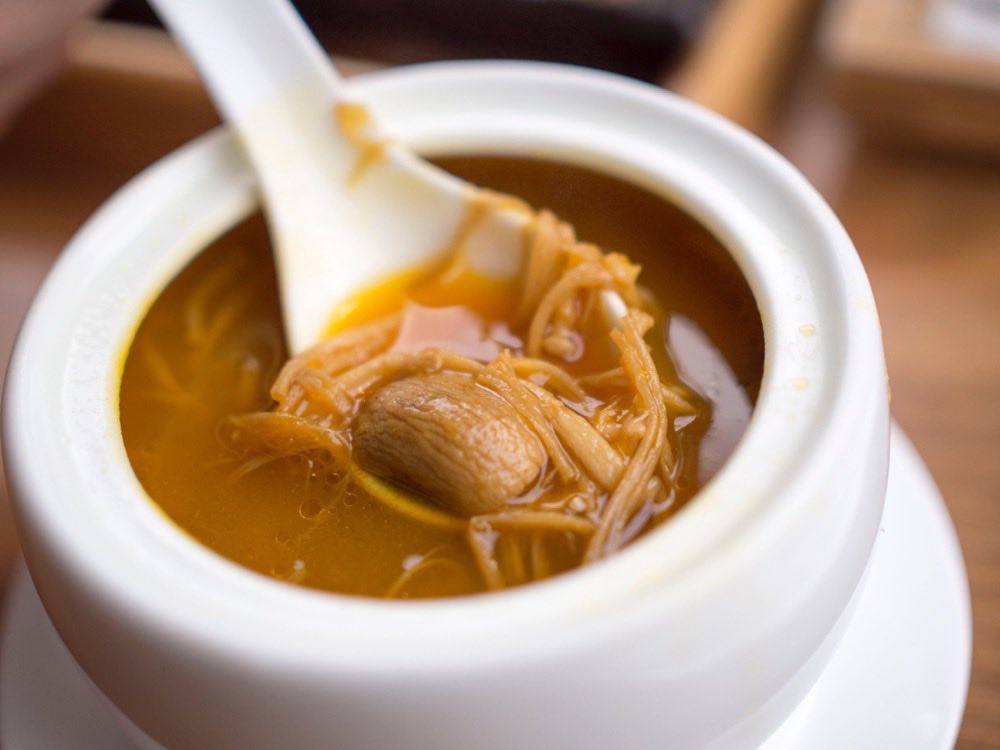 There wasn’t an english name for their flagship soup, which in chinese ‘福寿全’ roughly translates to good fortune. It was their vegetarian take on the classic cantonese ‘Buddha Jumps over the Wall’ soup, in which many prized seafood are used and stewed for 48 hours to create a sublime pot of soup fit for the Gods.

The version at Wujie used many types of mushrooms and root vegetables with pumpkin creating the overall color and texture.

It tasted remarkably rich, complex and full bodied for a pure vegetarian soup.

We were advised not to stir the soup, and slowly drink it ladle by ladle to uncover the multiple layers of ingredients and flavours. It was almost like opening a soupy present, and was definitely a soup to remember for days to come. Seriously, this has so much going on in such a small package that I award this a 10/10 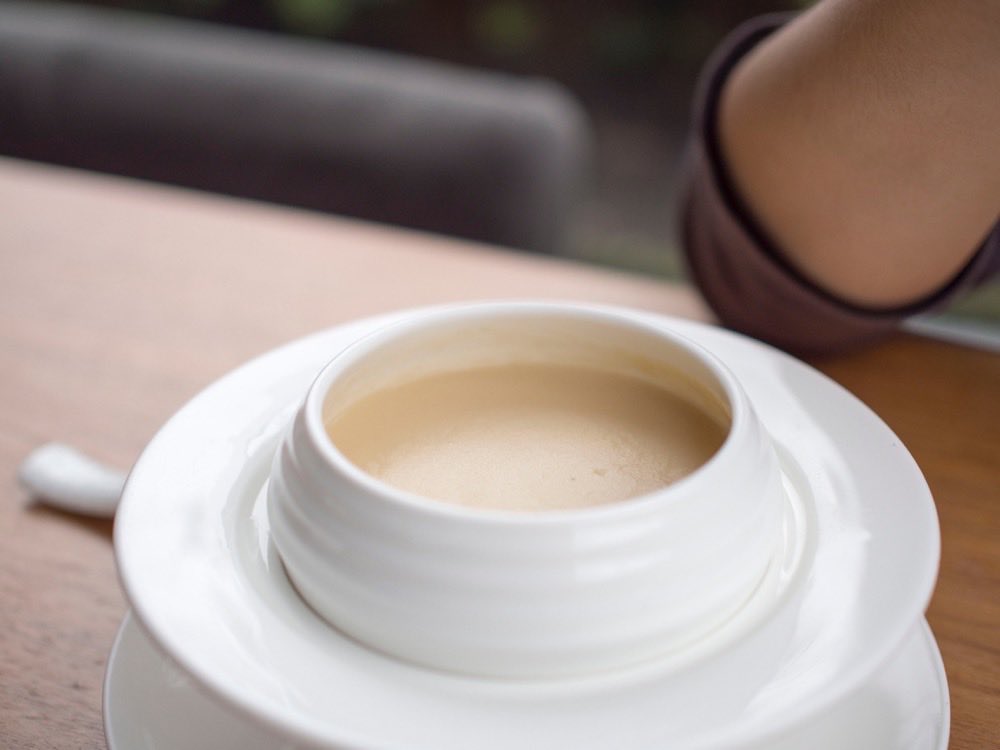 This one is catered for the ladies obviously, consisting of beautifying ingredients such as white beans, mountain yam, barley and burdock.

This was meant to mimick a western cream-style soup, and it did achieve that effect.

Overall very rich and pleasant, albeit abit thick for my liking. Paled in comparison to the earlier soup. 7.5/10 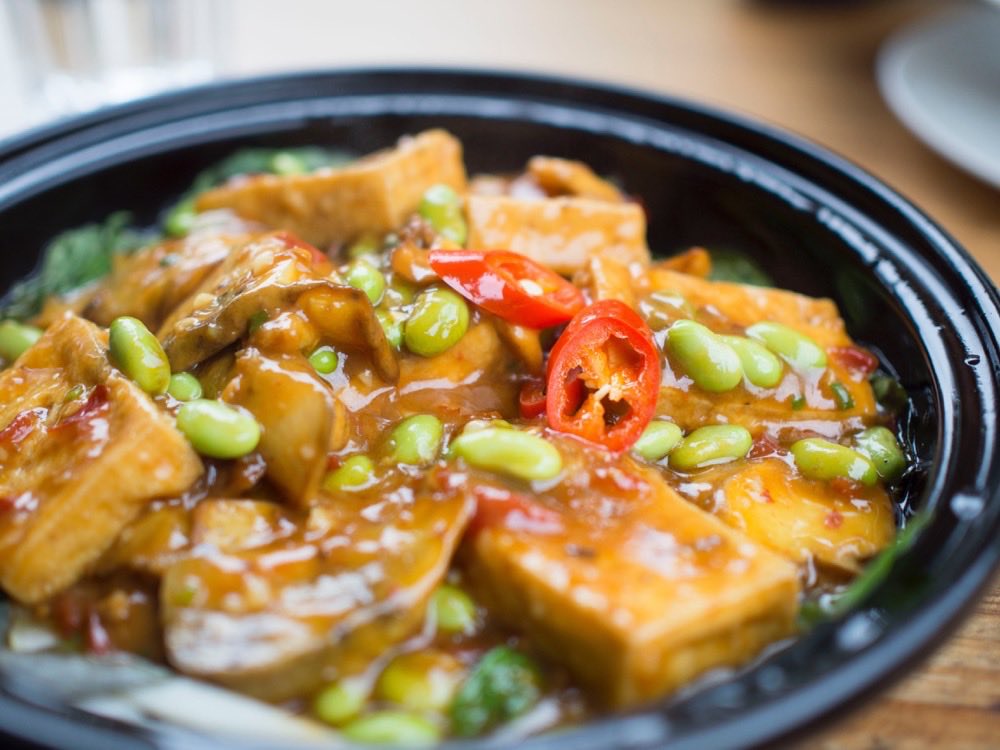 I like tofu casseroles, so I had to order this. It had a taiwanese influence from the soy based sauce and basil. The tofu at Wujie is all housemade by their tofu chef, and had a  nice soy bean fragrance while remaining firm. While this was a pleasant tasting dish, it didn’t quite stand out from the other dishes we had tried so far. 7.5/10 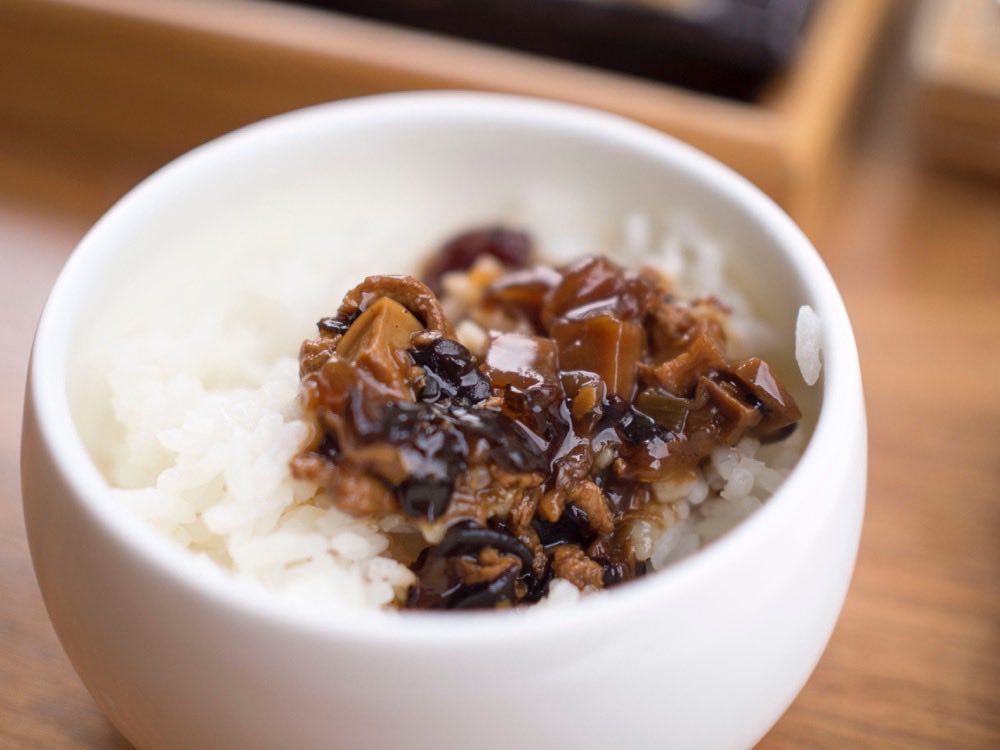 We were also given a small bowl of rice, resembling Taiwanese braised pork rice. Mushrooms were used in place of the pork, and i found the sauce very nicely balanced between salty and sweet, and literally gobbled down the bowl of rice despite having said that I wasn’t interested in rice. 8/10 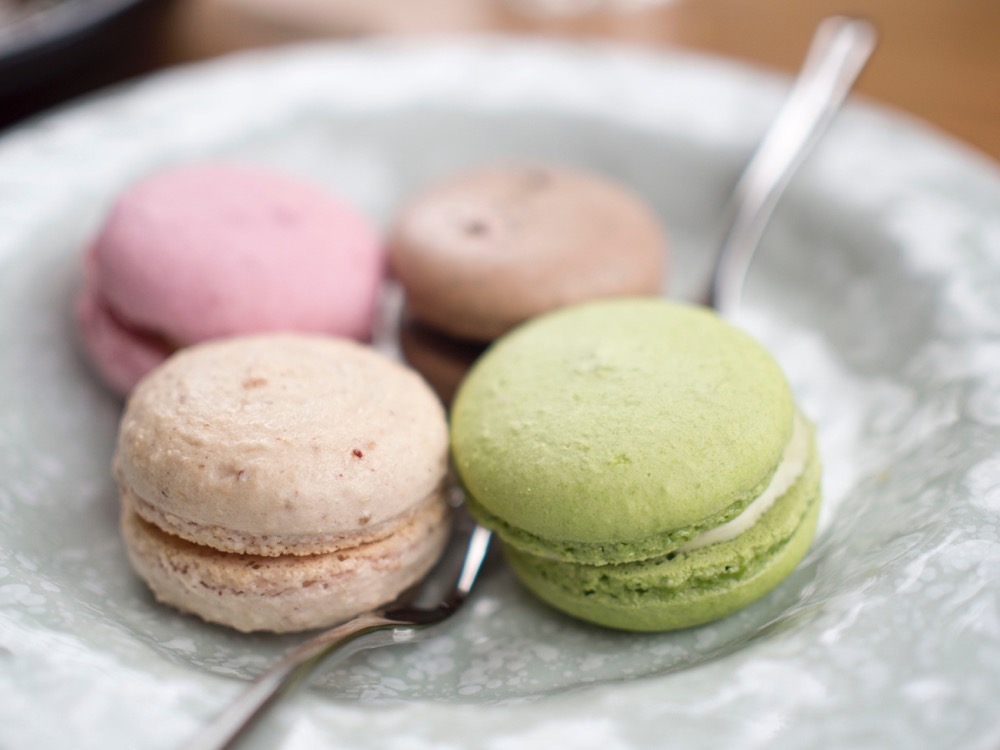 Miss Ma is a sister brand by Wujie, specializing in vegetarian macarons.

I’ve had macarons from many places from all over the world. The ones by Miss Ma tasted pleasant in terms of flavour, not too sweet, but they were unfortunately soft and damp throughout.

A good macaron in my opinion should be dry and crispy on the outside, while being moist and soft within. I didn’t like these very much. 5/10

In conclusion, it is a marvel at what they have managed to accomplish at Wujie. Replicating the ‘feel’ and textures of the meat dishes we’ve grown to love. Prices are a little high and inconsistent between dishes, especially knowing that no meat was used in all of the dishes. However I am willing to pay abit of a premium for the creativity and work that had gone into producing these dishes. If all vegetarian food tasted this good, I would be perfectly fine without meat in my life.

Yes, this would be the quintessential place to bring any vegetarian friend to, or to enjoy a good quality vegetarian meal.