It’s been awhile since my last tasting of the offerings at Mr Nice Cafe, and my wife had been begging for me to bring her to check out their legendary napoleons, so finally the time had come. 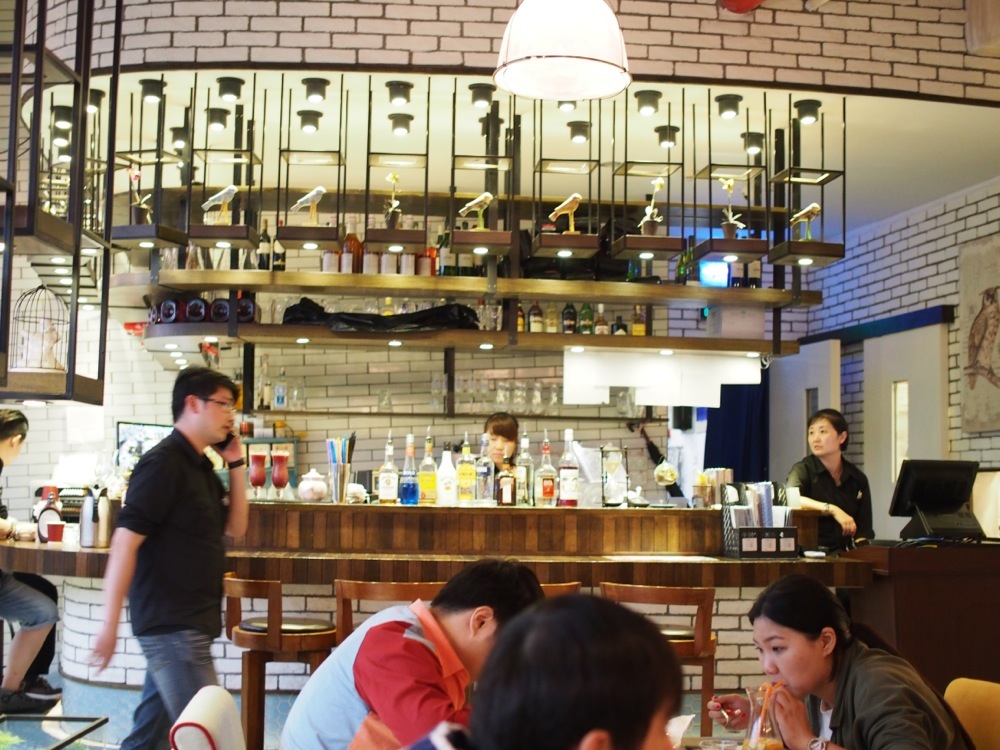 Now that half a year has passed, it’s a good time to identify the crowd favourites, and whether or not standards were the same.

We ordered the Salmon potato cakes, the smoked salmon and shrimp pasta for the missus while I had the Mr Nice Burger. For drinks, I had the healthy Mr Green, whilst the missus chose the Mrs Berry.

So how was the experience? The food was generally decent, short of a few details to be elevated to excellence. The service could use some tightening. 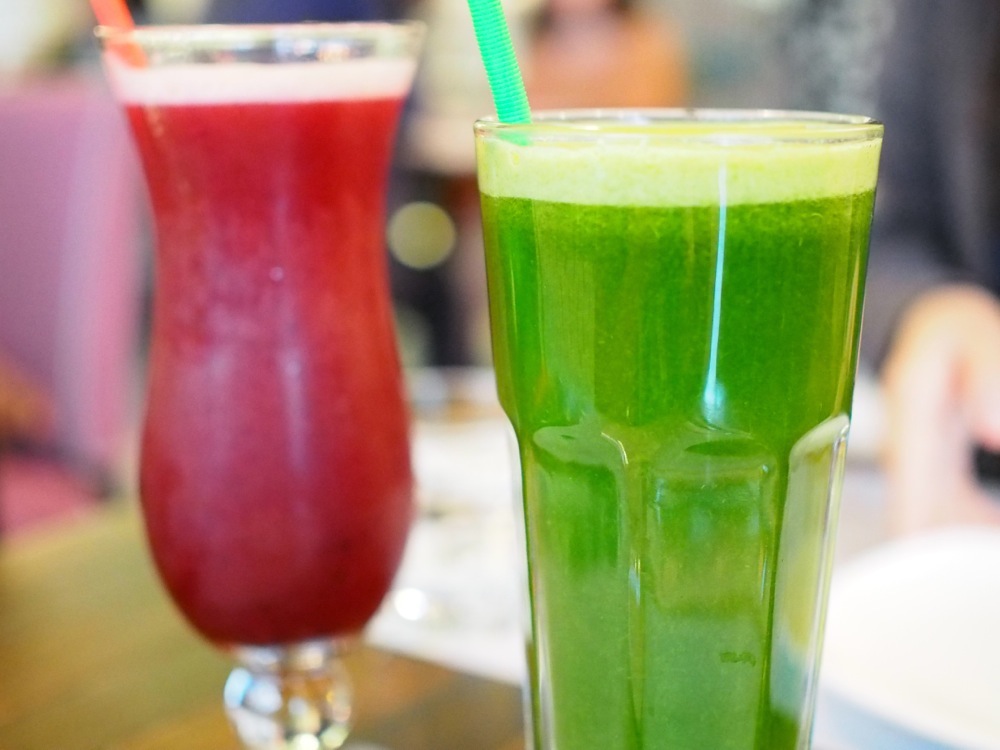 The Mr Green is a healthy blend of apple juice, spinach and lemon juice. This was different from the last time I tried it, which tasted more like a veggie shake. This time it tasted more like a juice, and quite sweet. I quite liked it, if only it was a tad colder.

The Berry drink had primarily strawberries and some berry jam, according to the waiter. Very raspberry tasting, which reminded me of the cough syrup I had when I was a child. Not my cup of tea. 8/10 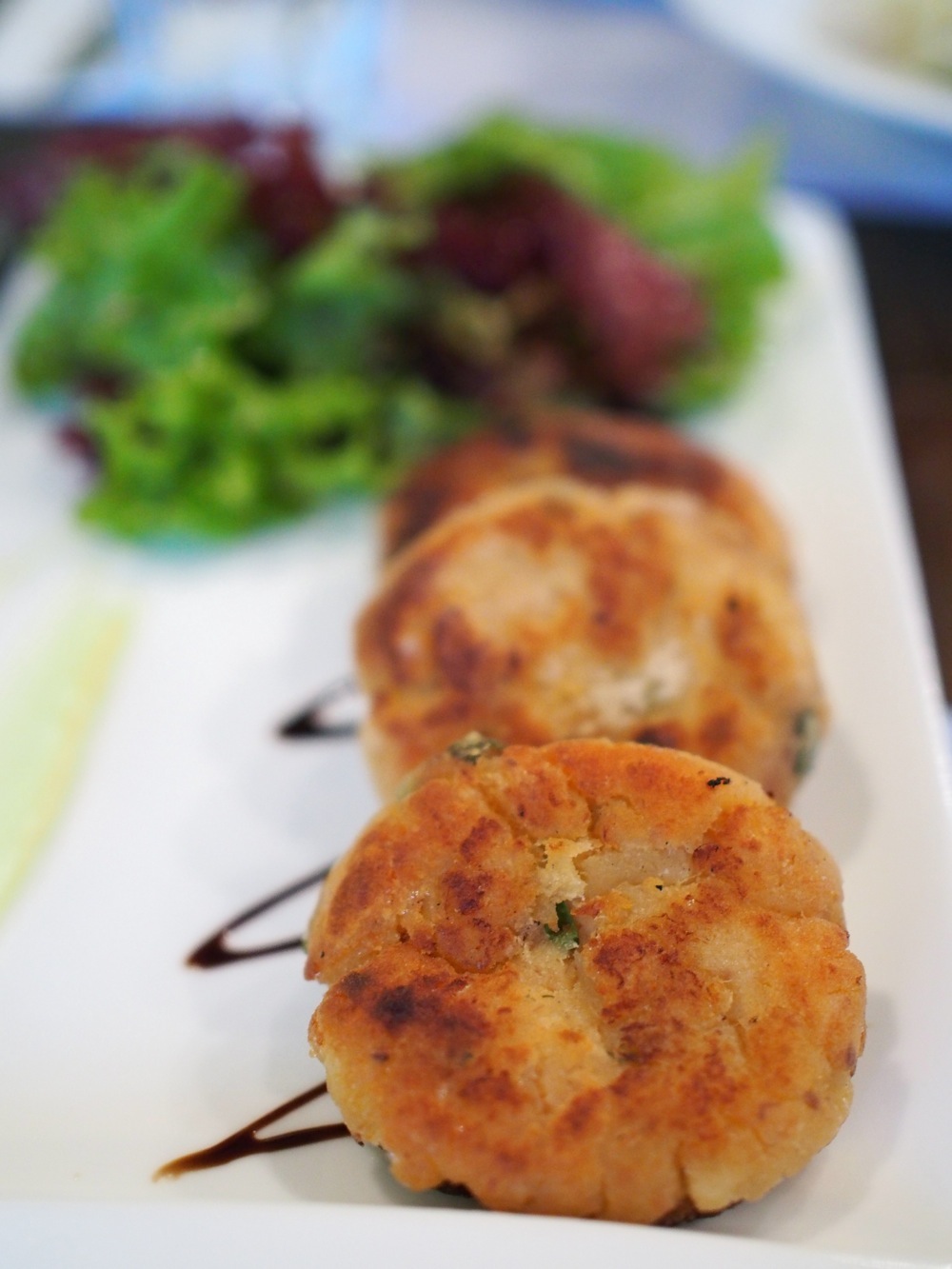 The next 2 dishes came 10 seconds apart from each other, but what the waitress did really annoyed me. The smoked salmon and shrimp pasta arrived first, and she placed it on the middle of the table, without asking who was having it. A few seconds later, she brought over the starters, the potato cakes and placed them right in front of my wife, as if she was having it as a main course. What?? Come on… I can’t even remember the last time I’ve had someone making such a mistake. 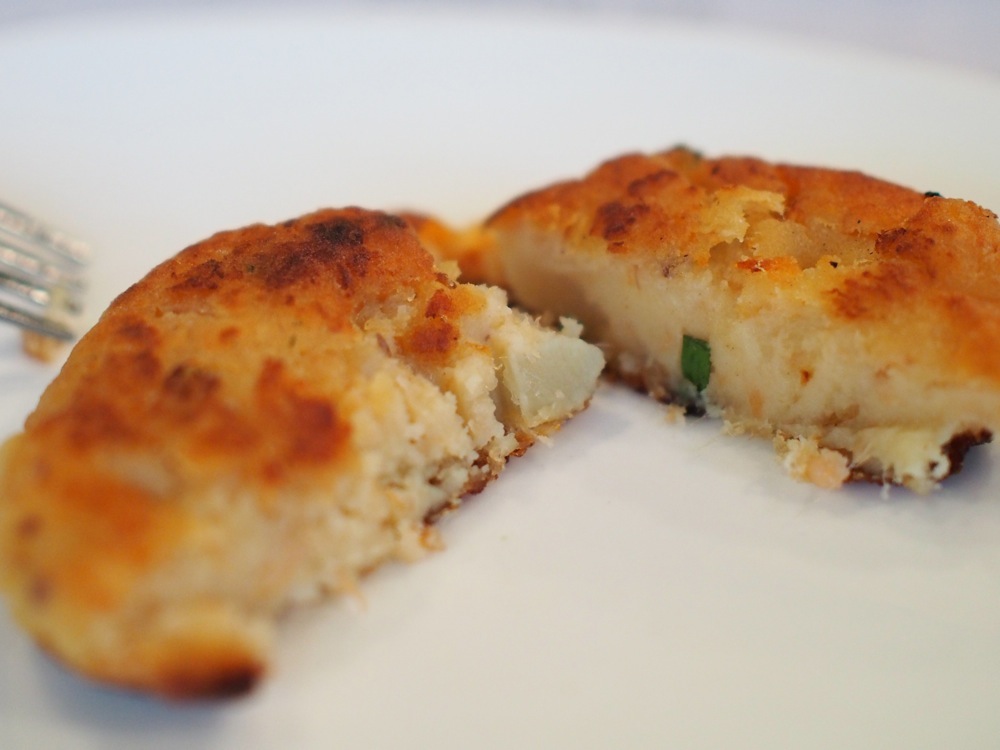 Salmon Potato Cakes. The potato cakes were to be honest, quite boring. Mashed potatoes and salmon flakes, lightly dusted with flour and fried. They were well seasoned, well cooked. Didn’t really detect much salmon, but it went quite well with the wasabi mayo. A touch of lemon juice / balsamic vinegar might have lifted it abit, because it felt quite heavy. 6/10

Smoked Salmon and Shrimp Pasta. The cream based smoked salmon and shrimp pasta was very nicely portioned, with a grilled large prawn and scattered with smaller shrimps and salmon. The sauce tasted very balanced, well seasoned and not overly rich like many other cream sauces. The capers and single cherry tomato helped lift the flavours and gave it another dimension. This would actually be a pasta dish I would come back often for, especially when it is also offered in their lunch sets. The seafood was fresh enough, but unfortunately, the star of the dish – the grilled large prawn is where the points get deducted from this otherwise excellent dish. The prawn was first of all, extremely overcooked. It was tough and rubbery, which was a huge pity because it had very a very good strong crustacean flavour. Secondly, if you looked at the picture of the prawn above, you will see that it had been split open at the top, something I always appreciate. But why was its intestine left sticking out like a sore thumb?? If you (the chef) did not devein the prawn because the cooking method required its shell to be intact, FINE. In this case, you had already split the shell, and the innards was already sticking out, all you had to do was pick it out!

The ladies in particular are often very mindful about this, and expectations start to drop after looking at the shit-sack. 7/10 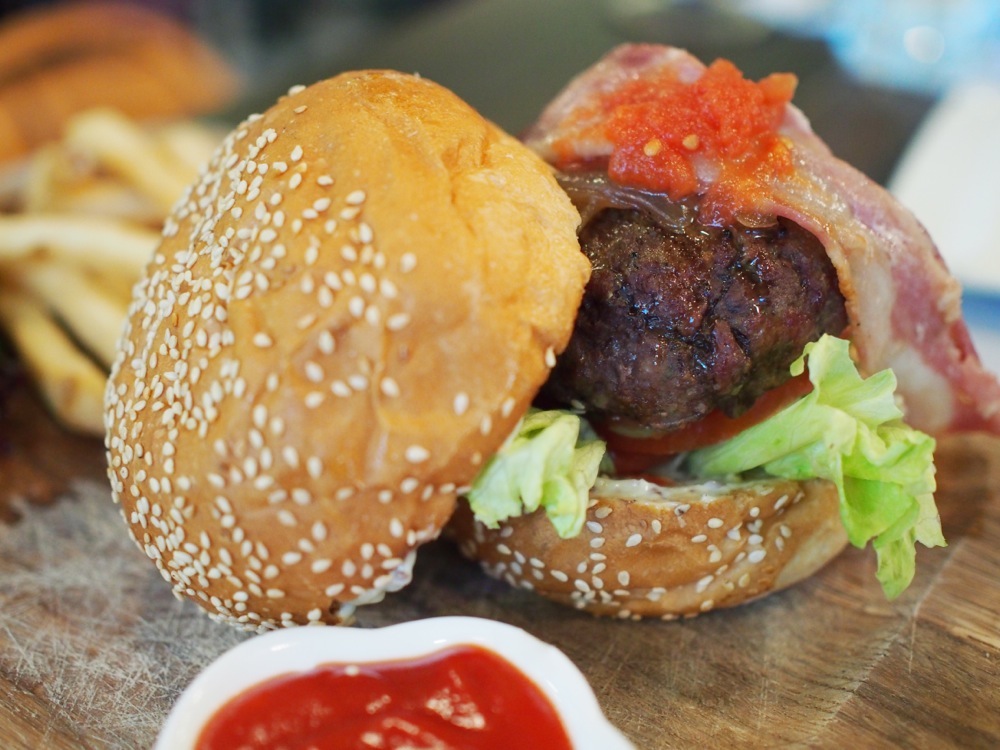 Mr Nice Burger. My burger was another tragedy that could have been easily elevated to excellence. It had all the classic components: bacon, tomato (in the form of a chutney), pickles, lettuce, thick patty. No cheese unfortunately. The pairing was nice, the flavours all came together nicely. Problem? I was not asked how I would like my burger done. So naturally, it came well-done – dry and overcooked. The bacon was not cooked well – it barely had any charr on it, and was soft and limp. What a pity, because it would have been a very good burger, along with a slice of cheese. The fries were crisp and freshly fried. 7/10

Lastly, the star of most meals at Mr Nice — The dessert. Our strawberry napoleon arrived just as I was finishing my burger (the missus had already cleared her plate). Good service timing. Long story short, the strawberry napoleon is still very very good, and lives up to its legendary status in Shanghai. Light and delectable mascarpone paired with the equally light pastry and fresh sweet strawberries. Adding some of the strawberry jam on the side gave the light and balanced dessert a sugary and fruity kick. This time round I discovered a new and more civilised method of eating the napoleon, which was to actually separate and pick up a layer of biscuit to eat. It worked quite well, and resulted in minimal mess. 10/10

In conclusion, the menu is actually quite solid at Mr Nice, only marred by some glitches in the food prep and service. The price point is just nice, and in fact excellent for value. If the bugs are ironed out, this would be an excellent and tasteful place to chill or bring a date to. Until then, it simply falls short of excellent.

Yup, definitely a place to return to. Hopefully things get improved!

My friend, R, wanted to bring us to his favourite Nasi Biryani place at Little India, Singapore. Unfortunately, his stall was closed that day, and hence we rerouted ourselves to the timeless Tekka Market smack…

MIZUKI: My Birthday Treat at an Omakase Tempura Restaurant in Singapore

Review of Gunther’s Restaurant, Modern French Cuisine in Singapore. Is it worth it?

Yishun 925 Chicken Rice, one I have been eating for over 20 years!

10 types of foods you need to eat when in Shanghai for the first time!

Visiting Shanghai for the first time and have FOMO on the defining foods of Shanghai? This listing has you covered!

In memory of Lewin Terrace

10 things you must eat when visiting Singapore for the first time!

Singapore’s Most Artisanal Nasi Lemak at The Coconut Club

Quite a lovely dinner from canton paradise, except

Quick and dirty 10min work from home lunch, made u

lovely fare at Punggol Seafood! Was here to look a

My idea of a perfect Saturday brunch at home. Baco

Yearly pilgrimage to one of the most visited cante

Been awhile! Lovely lunch at Afuri, Funan. The gyo

Soju and Cheesey brisket fries from Burgs for dinn

Christened my new kitchen with a pot of curry toda